Swimming in A Sea of Midrange

A couple of weeks after the release of the new set and the set rotation in Standard, the format has consolidated into a battle of midrange and pseudo-control decks, with many strategies trying to dominate the format.

In the previous Standard rotation, I quite established myself with Rakdos Anvil and put up good results with it. In the new sea of midrange decks currently dominating the format, I was pretty sure it would be a great option, as in midrange matchups, cards like Oni-Cult Anvil and Experimental Synthesizer are difficult to deal with and would most likely take winning ground in the midrange matchups.

The playstyle of Rakdos Anvil depends a lot on the list, as there are variants that play with cards like Voldaren Epicure and Ob Nixilis in the main deck and others that focus more on grinding out the game to a point of stabilization and spiraling card advantage.

My plan for the current Standard meta is to respond to opposing threats in the early game, stabilizing on turn five or six. We have many tools to combat early threats like Raffine, Scheming Seer, Sheoldered, the Apocalypse and Tenacious Underdog – we just need to sequence our spells well enough to be able to stabilize the board as quickly as possible.

This deck depends a lot on your ability to make decisions in very complex circumstances, so the card that can make the difference between winning and losing is Experimental Synthesizer – without a doubt one of the most complex cards I have ever played with. You need to perfectly analyze the boardstate to get the most value possible and prevent it from being a bad Divination. The optimal use of Expirimental Synthesizer probably warrants a separate article, which I am looking forward to writing in the future.

Oni-Cult Anvil is another heavy decision-based card. Learning to use this card properly has cost me nights and nights of testing. There are times when you are pressured to activate its ability and other times where you need to be more careful with your artifacts. I feel like a bad Onicult Anvil decision can make the difference between victory and defeat, and this card also probably warrants an entire separate article down the road.

The archetype was affected by the rotation of Deadly Dispute, the deck’s premier engine card. This being the only big loss, the archetype remains somewhat intact. The questions that followed would be: how should I build the deck for the new Standard? What tools do I need to succeed?

Here, I will show you my proposal for Rakdos Anvil in the new Standard – one of the most complex decks I’ve ever played, but one that pays very well if you manage to pilot it correctly and efficiently. The core of the deck is based on artifacts, commanded by Oni-Cult Anvil, a very interesting card with an exquisite design for artifact decks. It could be said that four copies of Oni-Cult Anvil and four copies of Experimental Synthetizer are mandatory in the deck, but choosing the accompanying artifacts in the new format has been somewhat of a challenge. Reckoner Bankbuster in the maindeck is a great decision at the moment, as the angles of play this card allows are unbelievably good, and in the matchup against midrange it can make the game. I am running three copies.

Unlicensed Hearse was something I had considered foregoing at the beginning, but with so many copies of Tenacious Underdog and Corpse Appraiser appearing in the top decks at the moment, it is worth playing at least two copies of. Hearse needs time to grow throughout the game, and Rakdos Anvil provides just that.

Lantern of the Lost and Wedding Invitation are cards that go hand-in-hand with Oni-Cult Anvil, and I decided to play one copy of Lantern as a graveyard hate tool and a Wedding Invitation to combat the many planeswalkers that are being played at the moment. This card has scenarios where it helps you solve these problems.

As in most Rakdos decks, four copies of Bloodthite Harvester doesn’t require much explanation.

Braids, Arisen Nightmare is a card that I have been testing lately with good results. There are  game states where it is very good and other, more unfortunate moments where you do not want to activate its ability. As those positive boardstates have outweighed the bad thus far, I feel confident in running a single copy in the mainboard. 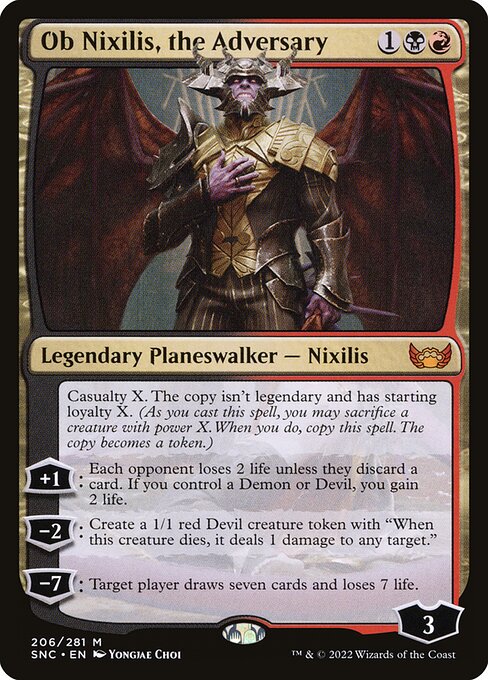 Ob Nixilis, the Adversary has post-sideboard moments where it can shine. I really like to run it when I’m on the play, and against midrange or control decks, it sets a pretty annoying clock and gives you the breathing room you need to grind the match more freely.

The number of copies of Voltage Surge is a bit of a flex spot in the maindeck. I always played four copies, but in the new Standard format, I decided to cut a copy, since it is not effective against Sheoldred, the Apocalypse, which is the most threatening card in the format at the moment. Soul Transfer is my favorite removal card in the deck. I play only two copies because of its mana cost, but it’s very efficient and, in this deck, it has a high chance to trigger both of its abilities.

One copy each  of Infernal Grasp and Eaten Alive are there to get creatures like Sheoldred and planeswalkers like Sorin the Mirthless out of the way.

I find three copies of The Meathook Massacre to be ideal in Rakdos Anvil, as it is, of course, a sweeper, but also represents a win condition in decks like this.

Fable of the Mirror Breakers is arguably the best Standard card right now, and needs no introduction or explanation. If you play red, you almost have to play some number of Fable.

Reckoner Bargain does the job that Deadly Dispute used to do, only this one is a little worse. The fact that it does not generate a Treasure Token totally changes the lines of play that this deck used to have. Still, the card represents a two-for-one and has suited me well thus far, especially in the Midrange matchup in the later turns. I would not run more than two copies.